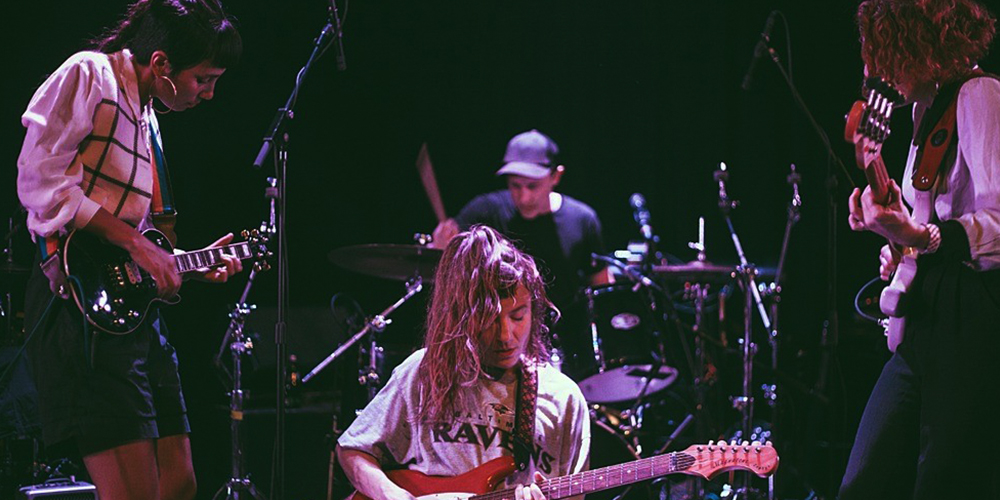 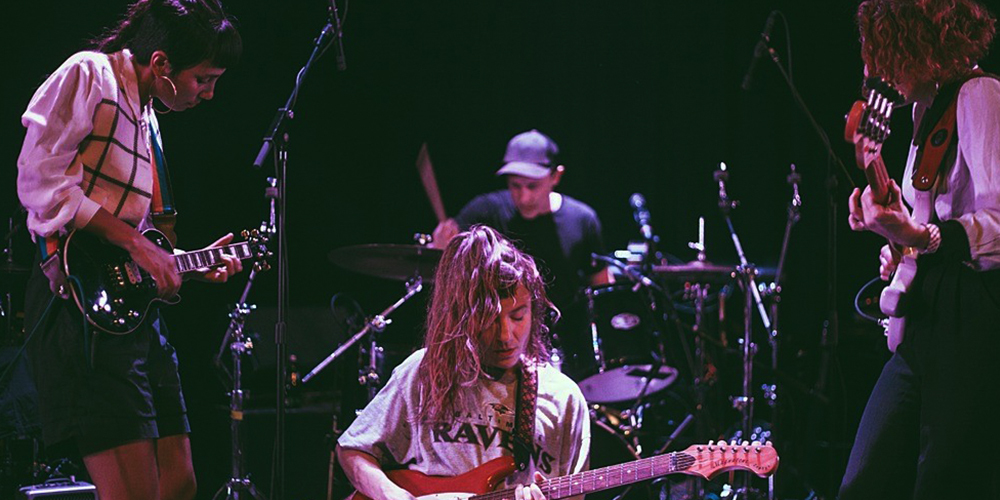 Loneliness, isolation, alienation, the need for connection and community. The salient themes of our times resonate with a haunting, predictive and vital power on the third album from London four-piece Landshapes. Released through Bella Union on 11 December, Contact is an album that digs deep into the past, looks ahead to the future and burns with vivid life in the present, where its mind-expanding soundscapes, beguiling melodies and resonating emotions exude a tremendous in-the-moment vibrancy.

The title speaks clearly to the album’s themes, as intended. As Luisa Gerstein (vocals, synth) explains, “The working title for a long time was ‘Collapse’, but when we came around to naming it, and having the conversation from our respective isolation, we wanted to give it a name that was more hopeful, and about connectivity. Contact with each other; contact with the wider world amidst its unravelling; music feels like a really essential part of that right now. There has also been a huge gap between now, and the time we wrote and recorded this album several years ago, so it feels like a connection with our past selves as well, and like we’re hearing it fresh again.”

Contact took form after extensive touring for Landshapes’ second album, Heyoon (2015), where the band’s shape-shifting hybrids of alt-folk, psychedelia, math-rock and more brimmed with brooding beauty. The desire to sustain the focused fluidity and elemental power of their live energy – honed from Green Man to End of the Road and beyond – compelled them to continue playing and writing together, with strict principles to light the way. As Heloise Tunstall-Behrens (bass, vocals) puts it, “We approached this album with the idea of creating more space, simplifying and allowing things to breathe. We also wanted to keep the songs briefer, with fewer deviations.”

A few years later, Contact sustains those principles beautifully. The sulphurous sludge-rock guitars and depth-charged synths of “Rosemary” throb with a rapt intensity: while the lyrics reflect on ancestral DNA and the memory-stimulating powers of the titular herb, the physicality of the sound embodies a sense of the past living in the present, registered deep in the gut.

Throughout, Landshapes equip their elemental intimations and exploratory themes with a palpable immediacy. “Siberia” is a psychedelic folk song of ice and fire, its forceful chants set to deliciously lopsided rhythms; direct and mysterious. Testifying to the band’s road-tested chemistry, loose grooves are executed with a limber precision. “Drama” sets its snapshot of, says Luisa, “the imbalance of emotional labour that can happen between men and women” to an alt-R&B funk drift. With Jemma Freeman (guitar, vocals) and Dan Blackett (drums) swapping instrumental roles, “The Ring” is mantric, romantic pop with a troubled heart, its seeming simplicity deceptive. “I suppose it was a love song at first,” says Heloise, “inspired by some friends getting married. For me, it evolved into a feeling of connection with the world and non-human species – a partnership upon which we tend to rely and take for granted but don’t appreciate all the time.”

Elsewhere, moods and emotions deepen and diversify. “Real Love Is Dead” sets a tale of break-ups and Tinder to a misty synthetic backdrop. The spare, future-thinking “I’m Mortal” grapples with the question of giving birth in today’s world, treated vocals throwing its core human doubts into stark relief. For Luisa, the amniotic bliss-pop of “Dizzee” frames a reflection on “the specific experience of going to a queer people of colour club night for the first time, and feeling so ecstatic that the space existed, feeling at home, whilst simultaneously wrestling imposter syndrome”.

Look for evidence of the band’s live power and you will find them manifested forcefully on “Let Me Be”, an inside-out critique of white male self-entitlement set to a whirligig of organs, chants and fuzzy math-rock guitars. Born from a jam session on tour, the wordless harmonies and guitar-strafed lurches of “Just A Plug” add cathartic jolts of electricity. “It feels like a release and a chance to vent,” says Heloise, “even without lyrics the sentiment is there!” Finally, “Conductor” diverts that energy into a serene reverie on time and the body, its expansive imagery anchored in the immediacy of sensation.

After the voyages of self-discovery on their 2013 debut, Rambutan, and the wide-open reach of Heyoon, Contact pays testimony to Landshapes’ questing spirit. Recorded live at Soup Studios when it was in Limehouse, the album’s freshness reflects a strict resistance to, says Luisa, “over-cooking in the studio”. New tools helped flesh out the soundscapes, Jemma notes: “actual synths”, a Boss Dr Rhythm drum machine, and fresh guitar pedals enrich the sonic palette without gratuitous studio interference. Meanwhile, storied sound wizard and producer Kwes became, says Heloise, “sort of a fifth member”, helping to take the songs “to a new realm”.

As Jemma says, “We had a strong idea of wanting to keep a raw feel to the work, and that we wanted external ears to play a guiding influence and add a new voice once we had built the foundations. The sense of previous preciousness was something we could dispose of, as we had more confidence in our ability to play and write. I think it made us bold.” 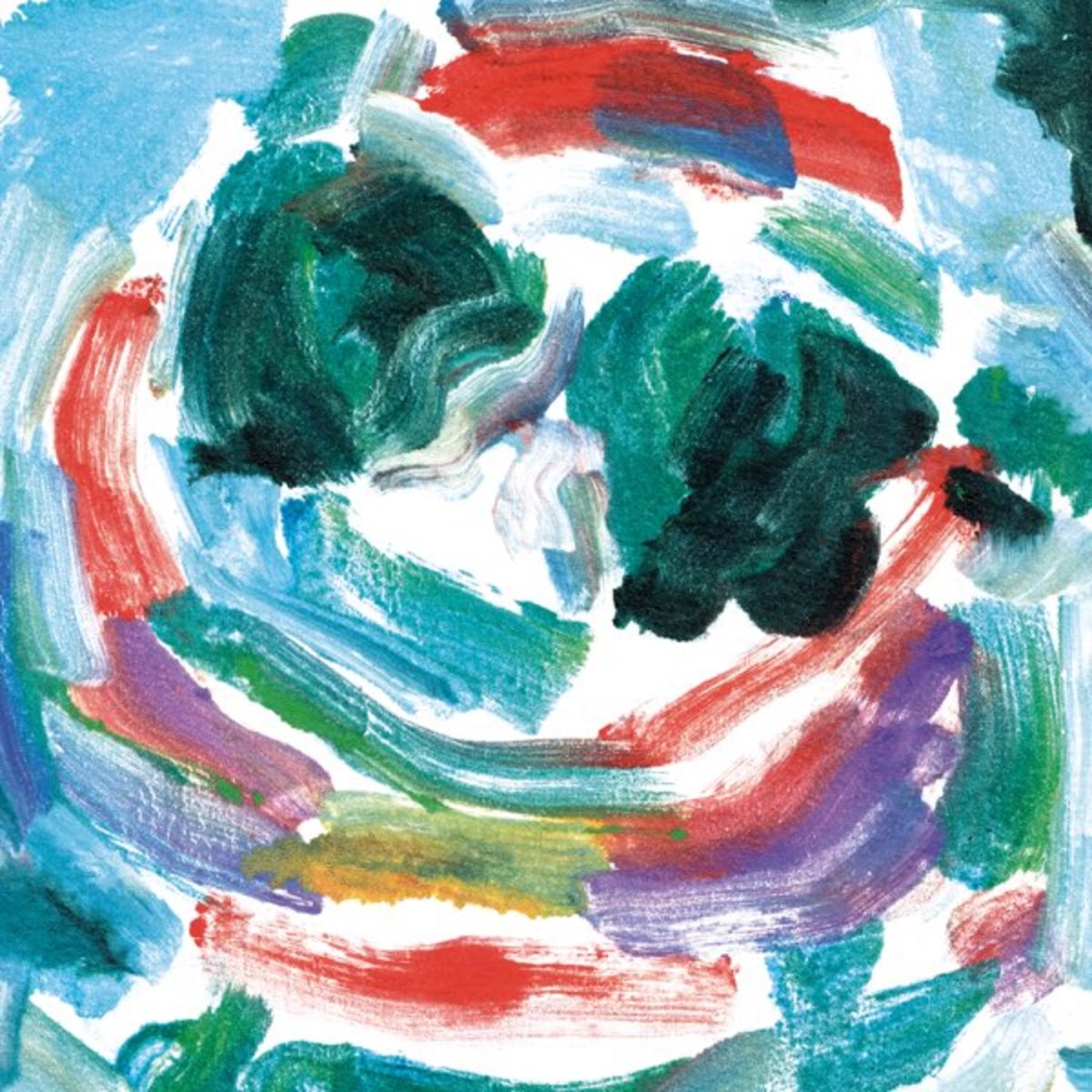